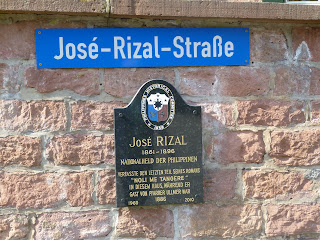 Sir Rainer and I had been feeding each other's sentences with Rizal quotes, Rizal ideas, Rizal letters, Rizal thoughts, Rizal jokes.   It is so amazing that a German citizen could know so much about our national hero.  I was painfully aware of so many things I still have to learn from him.

What was so astonishing is that he allowed me to ask silly questions.  Rainer is a retired English, History, and Social and Political Studies teacher.  He had been closely connected to Rizal studies for almost 50 years and he was playing the German tutor with me.  I wanted to know  what kind of flowers  Rizal  saw when he wrote the poem "To the Flowers of Heidelberg."  He drove me to Philosopher's Way.  "There," he pointed, "Those were the flowers he saw."  I looked at a wide expanse of blooms.  The roadside presented a painter's palette of varied hues and texture.

Then I noted a particular bush  heavy with white trailing blooms.  My eyes widened; my jaw dropped.  "It's almost like a white "Cadena de Amor,"  I exclaimed. What was in Rizal's mind when he saw those Cadena-de-Amor flower type?  Did he recall Calamba's blooms?  I cut off a twig and kept the cutting in my backpack. (This will later be my downfall with the US Customs at San Francisco Airport).


Rainer continued.... "While Rizal was walking this way, he met a local protestant pastor, Karl Ullmer.  They became friendly, and at one point, Rizal asked if he could improve his German by staying in his village in a sort of immersion language program.  The pastor then invited him to stay with his family in the vicarage."

We were nearing Wilhelmsfeld, and my heart began to beat wildly.  Somewhere, I'll get to see the house where Rizal lived, savour the place and feel the essence of that village scene that Rizal described so vividly on Chapter 7 of the Noli where Ibarra told Maria Clara of his Germany experience.

The car turned on to a neat looking street.  We pulled over to a sign on the road. It read "José Rizal Strasse".  Down the street, Sir Rainer cried;  "Are you ready?  There it is".


It was a plain white three-story stone house of green shutters with a dormer attic roof, incredibly maintained and well-preserved!!!  On the low fence, a special historical marker declared that the Philippine National hero spent the best time of his life in this house.

Rainer smiled, "See that third window with closed shutters on the 1st floor, right side? (In Europe, what we call 1st floor is their Ground Floor. Our 2nd floor is their 1st floor.) That was where Rizal finished writing the final chapters of the Noli. Pastor Ullmer's son Fritz, a 13 year old boy, remembered Rizal had a large map of the Philippines tacked up in front of his desk."

Then he continued softly, "See that room next to Rizal's room?  That's where I was born."  I developed some goose-bumps. This guy's Rizal connection is unreal!!!
I noted the church across the street where Pastor Karl Ullmer tended to his religious flock, and where Rainer's father, Pastor Gottlob Weber took over.  Later that day, in the company of Sir Rainer's lovely spouse, Idi, we visited the Rizal statue on Rizal Park.

It was an extraordinary experience.  First, the bronze statue is greater than life.

Second,  it is standing on a tidal pool where people can feel a close affinity to Rizal when viewing it.  It was designed to be part of the audience. Visitors could stand beside it and a picture shoot could show Rizal as part within the picture frame.

Third, the standing figure, holding a quill in one hand is shown as a  thoughtful and sensitive character.  I have never  seen any Rizal monument with these uniquely soft attributes.

The statue was crafted by Professor Caedo of UP. However, Caedo had deviated 180 degrees from his usual stern-looking Rizal template.


Our party-of-three watched the Wilhelmsfeld sunset gradually drain off the orange-yellow-ochre tint over the valley. We quaffed cooling drinks at Tal Blick restaurant.  Rainer's beer came in a curvy-twisty looking tall glass.  He joked:  "It seems like I got drunk and wrung the glass into a twist."  Later that evening  I marked that day's memory by drawing that twisted glass on a blank postcard using oil pastel and ball pen marker.
I boarded the Wilhelmsfeld bus that took me back to Heidelberg over a winding road on the Odenwald  forest, 13 kilometers to Heidelberg. Rizal walked through this forest glen three hours going, three hours returning.
Day Two of three perfect days ended in Heidelberg, where on my own I walked over to the familiar Rizal sites to imbibe the special Rizal aura. I needed that second look to have the images crystallize in my mind.

Posted by PenélopeVFlores at 9:57 PM

In a recent article by Ambassador Zaide, he suggested that the poem "To the Flowers of Heidelberg" was not literally about flowers. He was alluding to Rizal's use of the "flowers" as a metaphor for "frauleins."

Well said, especially when all people remember of Rizal is about his women exploits.