Tracing the Footsteps of Dr. José Rizal in London

PenelopeVFlores: Dr. José Rizal's annotation of Antonio Morga's "Historical Events of the Philippines".1609.
Posted by PenélopeVFlores at 7:13 PM No comments: Links to this post

In 1889-1890, Dr. José Rizal spent several months in London first, to do his historical research on pre-colonial Philippines and second, to improve his English language skills.

He lived  as a boarder with the Beckett family on 37 Chalcot Crescent,  Primrose Hill, Camden town, Greater London.  Today, if you visit London, you will see a Rizal plaque on this building's façade.  It announces proudly:  Dr. Jose Rizal. 1861-1896, Writer, and National Hero of the Philippines lived here. 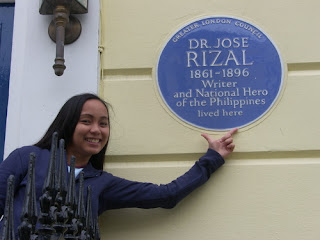 Rizal had a burning desire to know exactly the conditions of the Philippines when the Spaniards came ashore to the islands.   His theory was the country was economically self-sufficient and prosperous.  Rizal entertained the idea that it had a lively and vigorous community enriched with the  collective and sensitive art and culture of the native population.  He believed the conquest of the Spaniards contributed in part to the decline of the Philippine's rich tradition and culture.

In order to support this argument, he had to find out a credible account of the Philippines before and at the initial Spanish encounter.  According to Dr. Ferdinand Blumentritt, the noted Filipinologist, and Rizal's friend,  the Spanish historian Dr. Antonio Morga  wrote  Sucesos de las Islas Filipinas which was  published in Mexico in 1609.  Many scholars considered this history of the Philippines a much better and honest description of  the conditions in the country pertaining to the Spanish conquest.

Morga writes on his dedication page:  ....this small book ....is a faithful narrative, devoid of any artifice and ornament....regarding the discovery, conquest and conversion of the Philippine Islands, together with the various events in which they have taken part...specifically describing their original condition...

Rizal spent his entire stay in that fog-draped city of London at the British Museum's reading room.  He laboriously sifted, weighed, evaluated, each and every proof he could find in books, manuscripts, documents and other records from the vast  British Museum's Filipiniana Collection.  Having found Morga's book, he laboriously hand-copied the whole 351 pages of the  Sucesos.   Of course he  had to.  The Xerox copier and digital scanner were about 150 years yet toward  the future.

Rizal proceeded to annotate every chapter of the Sucesos.  It's a highly interesting and informative volume.   In Chapter One alone, I note Rizal's footnotes ran over three-fourths up the pages  (pp 4, 5).  Like a brain surgeon examining a monitor, it's as if we are privy to an image of Rizal's brain and how it worked.  Nothing but nada escaped his beagle eyes.  He annotated even Morga's typographical errors.  He commented on every statement that could be nuanced in Filipino cultural practices.  For example, on page 248 Morga describes the culinary art of the ancient Filipinos by recording: ...They prefer to eat salt fish which begin to decompose and smell.   Rizal's  footnotes reads:  This is another preoccupation of the Spaniards who, like any other nation in the matter of food, loathe that to which they are not accustomed or is unknown to them...... The fish that Morga mentions does not taste better when it is beginning to rot; all on the contrary:  it is bagoong, and all those who have eaten it and tasted it know that it is not or ought not to be rotten.

The value of this work is immeasurable because Rizal provided the readers with such an array of rich societal and cultural footnotes with complete scholarly referenced resources and full citations.  Each chapter is sufficiently and authentically annotated regarding the Philippines in ancient times. Sad to say,  many students of Philippine history are unfamiliar with Rizal's annotated  Historical Events of the Philippine Islands by Antonio Morga.   This book is available in English published by the National Historical Institute, Manila, 1990.


I say to the serious Rizal scholar:  Get thee to the "Sucesos annotated by Rizal." Your literary appetite will be whetted with juicy cultural episodes in italics penned by our national hero.


I  suggest to the organizers of the forthcoming San Francisco  Filipino American International Book Festival, scheduled to be held on the 1st and 2nd of October, 2011,  that this precious volume  be made available among the book exhibits.
Posted by PenélopeVFlores at 3:49 PM No comments: Links to this post