Dr. José Rizal loved to entertain his young nephews and nieces by telling them stories and drawing sketches. For example, he translated from German to Tagalog, some of the folk tales of  the Grimm Brothers (Thumbelina, The Ugly Duckling, The Pine Tree and the Little Match Girl.) He included pen and ink sketches.
I read all his Tagalog translations of the folk tales including the story of William Tell,  and I was chuckling to myself because I could hear his regional Tagalog dialect as he wrote his translation.
I discovered to my utter delight that he had a Southern Tagalog “puntó” or regional accent.  I grew up in Mindoro, a Southern Tagalog region and our Tagalog punto is influenced by the Batangas accent. José Rizal, who is from Laguna,  similarly had a regional accent very close to Batangas.  For example, in his translations, he used the verb word “bagá” instead of the Northern Tagalog “ba”. (Magliliparan kaya baga ang mga maya?  Will the birds fly around?  In another example, he makes his statements of affirmation or empathic declaration with the Southern Tagalog word “mandin.” (Hindi mandin ako matanda.  I am not aged.)   He used the comparative verbs  "like" (not parang,  Usok na parang alapaap, while in Southern Tagalog a comparison word is  anaki) Usok na anaki'y alapaap. (Smoke like clouds).
When José Rizal went to Paris in 1886 to train as an eye specialist with Dr. Louis De Wecker, he used to visit with the Pardo de Taveras (Felix and Trinidad, were both physicians).  There he enjoyed the company of sweet and lovely Paz, the  Pardo de Tavera sister (who later became Mrs. Juan Luna.)
In those times, young ladies kept a souvenir book or album where they requested their friends to inscribe small poems, prose dedications or some remarks or sayings.  I recall that I did the same when I was in high school. I have a little notebook (which we call Autograph book) where I ask my friends to write a short dedication. I got one who wrote” Roses are red, violets are blue….”
Paz Pardo de Tavera asked Rizal to write something in her Album. The album pages were almost full, so on the last remaining 8 pages Dr. José Rizal retold a familiar and famous Filipino folk tale of  “The Monkey and the Tortoise”  and illustrated each scene as in a  picture book!
First of all, it was an extraordinary concept of writing a folk tale in a young girl’s autograph book, instead of writing some sweet and syrupy lines.  Secondly and grandiosely, he rendered all the scenes using pen and ink sketches right on the spot.  Thirdly, with just a few strokes of his pen, the emotive aspect of the characters in the folk tale amazingly came out alive.
Now, as you re-read this Rizal entry in Paz Pardo de Tavera’s Album keep in mind that this story of the trickster monkey and of the resilient turtle  continue to enrich and enlighten many readers.


Here is the plot of the tale of the Turtle and the Monkey, illustrated by Dr. José Rizal.


"The turtle and the monkey found a banana tree floating in the river. It was a fine tree with large green leaves and healthy roots.  They took it ashore and divided it in two.  The monkey, being the stronger one, took the upper portion with the green leaves, while the small turtle was left with the ugly stump with roots. They planted their respective banana plant, but unfortunately, the monkey's leaves withered and died, while the stump with the roots grew into a tall plant and bore some banana fruits. The turtle could not climb the tree for its fruits, so the monkey volunteered to climb the tree  But he devoured all the fruits.  The turtle begged "Give me some too!" but the monkey took no notice of her. The tortoise went to the river and picked some sharp pointed snails and stuck them around the banana plant, and hid herself under a coconut shell. When the monkey went down, the prickly periwinkles tore into his flesh.  The monkey searched and found the turtle.  The monkey said,  " Aha, found you. You must pay for your wickedness, but since I'm very generous I'll leave you to choose your manner of death.  Do you want me to pound you to pieces with a mortar, or shall I throw you into the water?" The turtle cried, "The mortar, I'm so afraid of drowning in the river."  "Ho, indeed, you are afraid of the water. Now, I will drown you," said the monkey and he threw the turtle into the river.  But the turtle's head bobbed out of the water and laughed hard at the monkey.   He had outwitted the clever monkey. Rizal added a Filipino proverb at the end by his signature. It read:

Matalas man dao ang matching, Ay napapagdayaan din.  (No matter how artful a monkey is, he can always be outwitted.)


See Rizal's illustrations of the Philippine Folk Tale below: 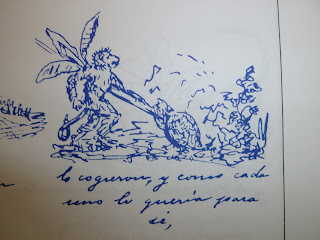 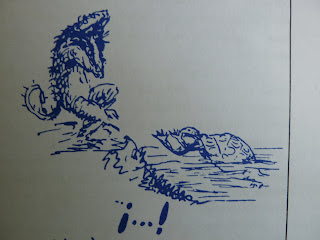 Posted by PenélopeVFlores at 10:33 PM No comments: Links to this post